Universally designed from a range of aspects by incorporating expert opinions and conducting various verifications, the door operation switch is easy for anyone to use and thus is friendly to all users.

Guidance by illumination
The button to be pushed next lights up to help users push the correct button without having to think.

Example: “Press the close button inside to use the toilet.” 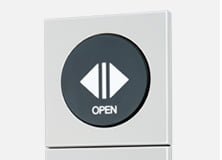 Due consideration for the visually impaired people

The buttons are protruded from the mounting surface to allow visually impaired users to easily recognize the buttons by feel. Also, pictographs are shown alongside ordinary characters on the buttons for higher palpability.

Black push-buttons and white ones are used in combination to make them easily recognizable also for people with color vision deficiency. Embossed characters will be displayed in between the black and white buttons only when the toilet is in use, thereby clearly showing whether it is occupied or not. 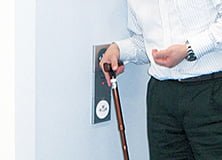 Due consideration to people in wheelchairs and the elderly

To make the buttons easier to push, the diameter of each button is set as large as 70 mm. Even people who are physically handicapped can easily and assuredly push the buttons with only a small amount of force.